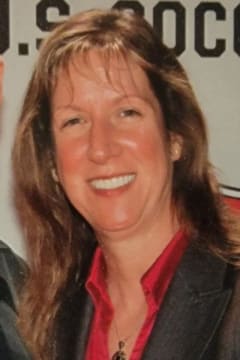 Linda Gayle Rimmer, beloved wife, mom, daughter, sister, aunt, friend, and soccer enthusiast, died on Friday, April 29, 2022 at Kindred Hospital in Seattle following a struggle with respiratory failure not related to Covid-19. Linda was the daughter of Thomas and Mary Anne Witty. She was born in Kansas City, Kansas on April 20, 1964 and raised in Topeka, where her father was the Kansas State Archeologist and her mother was an elementary school teacher. Linda attended public schools in Topeka, and graduated from Washburn University of Topeka with a BA in English and Communication Arts. She was a member of the Alpha Phi Sorority. While at Washburn, she reconnected with Conrad Rimmer, who was also attending Washburn. The two first met when they attended elementary school together. Linda and Conrad were married on August 15, 1987 at Countryside United Methodist Church in Topeka. Conrad’s job as an engineer with Boeing took them first to Wichita, Kansas and then in 1989 they moved to the Seattle area. They have been living in Covington, Washington for the past 21 years.

Following the births of her children, Erika and Kurt, Linda became a dedicated soccer mom. She learned to play soccer and played on several teams. She also coached her children’s teams. When her children were in school, she volunteered and worked as a teacher’s assistant. Linda volunteered with the American Red Cross for several years and went to the New York City area to assist with disaster relief following Hurricane Sandy. She became active in the Washington State Soccer Association, served as the president of the Washington State Women’s Soccer Association for 7 years, and was a founding member and president of the Cascadia Adult Soccer Association. Linda was also active in the South King County Soccer Referee Association as an instructor and referee. She was an avid supporter of the Seattle Sounders.

She cherished her time with friends and family and brightened the lives of those around her
with her warmth, compassion, and sense of humor. As a perpetual humanitarian and volunteer, her life was guided by her love of connecting with people, and by her unfailing desire to serve others.

In recent years she and Conrad became active members of the Meydenbauer Bay Yacht Club in Bellevue and enjoyed cruising area waters on their boat, Cunucu. Linda was predeceased by her father, Thomas Witty, and her father-in-law, Dale Rimmer. She is survived by her husband, Conrad, her children, Kurt (Ariana) and Erika (Eugene), her mother, Mary Anne Witty, her mother-in-law, Lois Rimmer Glazier, mother-in-law, Julie Kraenzel, her brother, David Witty (Carla) and nephews Brett and Scott Witty.

A Celebration of Life for Linda is planned for Friday, June 17 from 2 -4 PM at the Meydenbauer Bay Yacht Club, 9927 Meydenbauer Way SE, Bellevue, WA 98004. Memorial donations in her memory can be made to the American Red Cross.