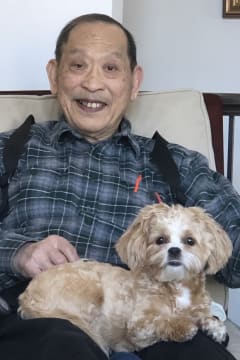 What sticks out in my mind is, I shared my father growing up. He was always there for mother and me, but he was the scoutmaster, coach, Sensei, guide, friend, and counselor to all. He loved fishing, hunting, gardening, cars, the Seahawks, and Mariners and working on things.

It is to note, his use of chopsticks for everything rubbed off on me and I am told others. His favorite shirts were tattered and worn, I never understood this, he had new ones. His love for life was huge and his love for others was endless.

Frank Haruo Yamada was born on April 3, 1933 in Ione, Colorado to Sentaro and Kahoyo Yamada. He grew up in Brighton, Colorado helping my grandparents farm with my Uncle George Yamada. He had other siblings, but they were deceased by the time my father was born. One of dad’s stories was that on the farm he had crawled out of his crib, ended up stranded in an irrigation ditch and baked himself in the Colorado sun while others were farming. Doctors stated he did not have much time to live, but my grandmother, was almost a doctor, rare for the time educated, nursed my father back to health.

Frank graduated from Brighton High School playing football, wrestling, track, and baseball. He also learned Judo while growing up in the Japanese community. He was loved by everyone and everyone knew dad it seemed growing up. I think most of it was due to my grandmother Yamada. I remember one time Mrs. Shibao thought I was my father and I sat watching amazed as she whipped up a meal in no time, when I stopped in to visit from Baylor to home in Seattle. She kept telling me stories of my father growing up and she was thankful to my grandmother for buying her wedding shoes since she did not have any, that were nice enough for her wedding day.

He was drafted by the US Army and went overseas to Korea working in the motor pool. After his service, he attended Colorado State University getting at degree in Agriculture. While at CSU he met Lily Uriko Kuwada, daughter of Masao and Kio Kuwada, from Borger, TX. They were married in Borger, TX in 1957 by Reverend Winfred Moore.

Together they worked at Glorieta and for the Coors family in their gardens. In 1962 they moved to Seattle, Washington during the World’s Fair. Frank was hired for $3,000 to work for the United States Department of Agriculture as a food inspector. Frank worked his entire career for the federal government.

Frank was a perfectionist and wanted things done perfect. Probably why he was a food inspector. The last conversation was I let him down while putting in a mailbox at the rental and I was fretting was not to his high-quality standards. He smiled, and said “who cares”, which I was shocked…I thought I was going to have to go back out there and do it right.

Frank is survived by his only surviving child Takashi Yamada, a son, his nephews (David, George, Glenn), nieces (late June, Carrie, Shirlee), their spouses, great nephews and nieces, and great greats… He loved all of them and enjoyed one last trip to Colorado last February 2020 His smile and hugs were famous, as well as his Seahawk touchdown kisses. He had many who called him brother and he loved many people as family.

Thank you for your outpouring of love since his passing. He is home with mother and other loved ones. It is hard, numbing at times and surreal, however, I did tell him if Jesus is calling to go home, go, and I will be alright. Love Takashi Yamada