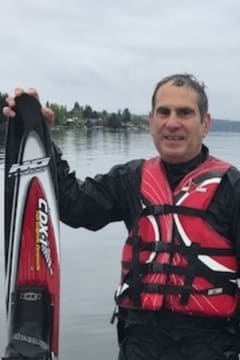 Obituary For Peter B Layshock

Pete was born in Pittsburgh, PA on August 29, 1955 and passed on December 7, 2021 at Evergreen Hospital in Kirkland, WA, where he had been for two weeks.

Pete’s family moved regularly until 1969, when they settled in Moraga, CA for the second and final time. He graduated from Campolindo High School, where he was a distance runner for the track and cross country teams. He was Eagle Scout #42 in Moraga’s Scout Troop 212, earning the award in 1972.

After high school graduation, Pete earned a bachelor’s degree in mechanical engineering at UC Santa Barbara. He put his degree to work initially at General Electric and Westinghouse in Sunnyvale, CA. In the mid 1980s he moved north to work for Boeing Corp at the Everett, WA plant, at first designing interiors for passenger jets, among other tasks. The Pacific Northwest proved to be a good fit for Pete, as he resided in the Kirkland/Bothell WA area from the mid 1980s until his passing. Professionally, in later years he did contract work as a software programmer for various companies.

Pete was an outdoorsman and an avid tinkerer/DIY’er. Depending on the calendar, he could be found downhill skiing, cross country skiing, snowshoeing, water skiing from his boat on Lake Washington, Lake Sammamish, or Lake Chelan, as well as camping, hiking, or anything else that got him outdoors. He traveled extensively, and was usually working on projects at his home, some times working with a contractor, more often than not doing it himself. He made and kept friends easily, and was very generous with his time and talents.

Pete is predeceased by his father John Layshock, in 2007. He is survived by his mother Margaret Layshock, his brother Steven Layshock, sister in law Joanne Layshock, and nephew Joseph Layshock, sister Jane Healy, brother in law Robert Healy and niece Lauren Healy. He is also survived by many aunts, uncles, and cousins, diligently keeping in touch with all over the years, as well as a long list of friends that shared his many interests.

Services will be held in the new year.