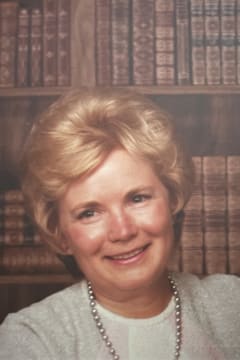 Maralee Ice, whose greatest love was her family, dies at 88.

Raised on a farm in Nebraska, the family moved to Washington in 1943.

Don and Maralee met at Toledo HS and recently celebrated their 70th anniversary. Son Stephen was born in 1953 just before Don was sent to Korea. She rejoined Don in Japan after the war. They traveled the world in the military until 1970. While in Taiwan, they adopted Stephen’s sister Kimberly.

Maralee again waited for Don during the Vietnam war. After the military they moved to Olympia to be near their parents and family.

Maralee took her mother Dorothy into her home during the last of years of her life and they enjoyed quilting and sewing together at the first Baptist Church.

During the 1980’s Maralee became a neonatal and psychiatric nurse at St. Peter’s Hospital.

She is survived by her husband Donald Ice, children Stephen Ice, Andrew Ice and Terra Riley, and by her brother Jerry Schroder and sister Patricia Luhr. She is also survived by son Stephen’s daughter Summer Ice-Tseng and great grandchildren Cedar Tseng and Lucie Tseng and by Terra’s daughter Lilith Riley.

Thoughts can be expressed at www.cadycremationservices.com 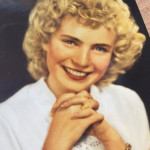 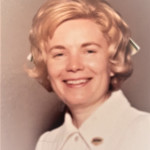 In 2009, I was fortunate to meet Maralee and Don through my dear friend Yoshi Tokita-Schroder, Maralee's brother Jerry's wife. Although we didn't met in person, the three of us had many enjoyable and enriching conversations over several years. And, as so many of you have mentioned, even through the telephone line I could detect and appreciate Maralee's sweet, caring and kind nature. I so appreciate getting to know her even better through your many comments here. Please know that you, Don, your family, friends, and all who treasure Maralee are in my heart. In the days ahead, I wish each of you the comfort of your many beautiful, funny, endearing times with her and the memories of how she enriched your lives.
- Veronica Spencer

Visits to Aunt Maralee and Uncle Dons were always memorable as I live far away. Aunt Maralee knew how to be there for you in the most thoughtful way. Her kind and caring nature shined through in everything she did. My favorite memories were after dinner, as we would sit down for a chat and a root beer float. As any Ice knows, Ice cream is a favorite. I treasured hearing stories about Grandma/Grandpa Ice and my father, Edward. I am forever grateful for my time with her.
- Colleen and Jonathon Young
Maralee was such a sweet giving person. She treated everyone as if they were her friend. Maralee was a person that loved her family unconditionally, helping them in any way she could. I know her as Pat's sister who absolutely adored Maralee and visa versa. The closeness of their relationship was heartwarming. God bless you Maralee and God bless those who she touched with her kindness. You are missed. Lovey Farler
- Lovey Farler

Don and Maralee are two special people in my life! Now that Maralee is with our Lord, I am honored to share a special memory. I enjoyed our visits at their home where I would sit at the piano with Maralee playing and singing hymns. We had so much fun!!! She will always be in my heart and I will continue visiting Don as I listen to his many war stories with interest and enthusiasm. What a lovely couple! Blessings to the family! Love, Pat De Neui
- Pat De Neui

Grandma Maralee always welcomed our family with a smile and open arms. Seeing the love for her grand children brought much joy to our hearts. Her good will and nature shall always be felt through her children, a tribute to what qualities she has taught and left behind.
- Mengson Tseng and Summer Ice-Tseng

We are deeply saddened by Maralee's passing. We are holding you all in our thoughts and prayers. And hoping that in time, each of you will find comfort in memories and some peace. Maralee was one of those rare people who knew how to make everyone feel special. She had such a kind and gentle way of caring for all those around her. And the sparkle in her eyes! There was always laughter just waiting to get out! We have such fond memories of family gatherings with delicious food, excited conversation, and lots of fun and laughter in your wonderful home. Maralee was so generous with her love and we will miss her more than words can express.
- Lorinda Bradley

Don, Marie and I send you and your family our deepest condolences. Maralee was a bright light in the neighborhood, as I am sure she was with all she met.
- Marie and Bill Course

Don: Marie and I send our condolences to you and your family, and if you need help with anything in the coming days, please let us know. Maralee was a bright light in the neighborhood and, I'm sure, to everyone she met. Marie and Bill Course
- Bill and Marie Course

My dear sister Maralee was one of the kindest people I will ever know. She helped out so many people who she came into contact with, with anything you needed she always went above and beyond. She was wise in her answers to my questions. My Mom would even say to me "ask Maralee" we were so proud of her when she became a nurse. A million memories of Maralee and her kind heart, Don & Maralee were always there for me. We loved shopping together at the mall at Christmas. God now has one of the sweetest angels in heaven.
- Pat Luhr

I started dating Jerry Schroder (Maralee's younger brother) back in 2003. I remember how she made me feel so welcomed and comfortable into the Family Clan! Between Maralee and their mother, Dorothy, they made the whole family around them & afar happy!! They had so many wonderful stories and they were eager and attentive to hear my stories as well. One of my favorite experience was in 2011. Maralee opened up their home to my friends to watch a 40 minute PowerPoint Presentation that I made of my Japanese-American Family before, during and after WW2. Then, Maralee served an amazing lunch - she was such a gracious & kind hostess - it was a very special day for me! Thank you so much - Yoshi Tokita-Schroder
- Jerry W. Schroder

I am very sad because your little brother will miss you forever. Jerry W. Schroder
- Jerry W. Schroder
I miss you terribly Aunt Maralee, but I am not so sad as I know you are with Dorothy, Kim and the rest of the family now. I love you.
- William Luhr

Too my one true mother who cared for me when she did not have to. I LOVE YOU! And will miss you till we me meet again. And sorry for your blue and white dress that I cut up when i was young.
- Jeffrey Ice and family

Know that whenever I pray for Kim I will be praying for you as well Grandma. I didn't get to see you as much as I would have liked, but I will always be thankful to you for making it SO much easier in meeting my family Kim, Terra, and Andrew. I love you, and I will see you again with Kim, someday. Love your Grandson, Nat Reinsma
- Nathaniel Reinsma

she was my mother. she was my grandmother (my bachan). she was the strongest person i knew other then her mother ( i miss you great grandma dorothy). she was understanding and kind and warm. she always cared for her family and friends and would fight for them till she won the fight. when i was sick (which was alot) she would stay with me. she would take me to whatever doctor i needed even if it ment countless drives to childrens hospital in Seattle usually leaving at 6am so we could beat traffic. when ever i was hungry she would make me whatever i wanted to eat. I always had everything i needed and more thanks to maralee and don. she made my life what it is today. i am so glad she got to meet my daughter before she passed so lilith can see how much she was loved by her great grandmother. i will miss her till the day i am no more. i will hold the memories i have of her with everything i have. i will make sure she is remembered. i will never forget all that she did for me. i will remember all that she taught me. most importantly i will NEVER forget how much she loved not only me but everyone. i love you grandma more than you could ever know 💜💜
- terra riley

Uncle Don, Aunt Maralee was one of the kindest and most gracious people I ever knew. I have fond memories of visiting your home as a child and playing with Kim in the most wonderful doll house ever made (by you). Maralee was such a good cook and I still like to make some of the recipes she shared (California Casserole is a favorite). She brought a lot of joy and warmth to treasured trips with my mother. And she always had wonderful advice and generosity when we visited. We will all miss her and are thinking and praying for you during this time.
- Julianne Ice Edmondson

Aunt Maralee was one of the kindest people I have ever known. I pray that our Heavenly Father assuage of the anguish of your berevement and leave you only the cherished memory of such a wonderful person. May the hand of our most merciful Heavenly Father lift you and comfort you during this most difficult time. Respectfully and Sincerely, Rex and Diane Ice
- Rex and Diane Ice

Mom loved the family get togethers. She was always there when you needed her. I no longer have mom but mom has me. When I walk, she walks with me and when the leaves rustle the Aspen trees, she is with me there too.
- Stephen Ice

Don, Kathy and I are keeping you in our prayers. We sure have great memories of our visits to Olympia, and remember how Maralee always made us feel so special when we were in your home.
- Ron and Kathy Ice