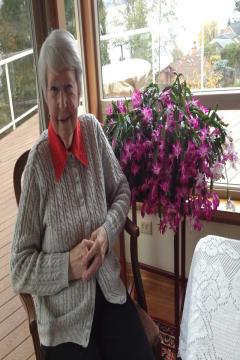 Detta Moffett Marvich born September 18, 1924 to Charles and Loretta Moffett passed away peacefully on November 27, 2021 at the age of 97. She was born in Tacoma, Washington. As a young girl her family moved to the Seattle area where she spent the rest of her life. Loretta and Charles had 13 children between them. Detta was the third of 9, in addition to her 4 older half siblings. She is survived by her two youngest sisters, Jeannette and Glenda. As a child Detta was her mother’s “right hand” as she loved helping to care for her younger siblings. She often said she didn’t need dolls because she had her little siblings at home to play with. She was a bright student who enjoyed learning. She graduated from Roosevelt Highschool.

As a young woman Detta loved to dance, spending many of her weekends at USO dances with her sisters and friends, jitterbugging and swing dancing the night away. Through a blind date arranged by her friend Katherine Lee, Detta met a handsome man recently back from serving in the Navy, Clarence Marvich. They were married in a small ceremony in Seattle in 1946. Clarence and Detta went on to have a long life together in a home they built on Mercer Island. Clarence and Detta were married for 61 years when he passed away in 2007. They raised 4 children, Detta Lynn, Steve, Mike and John. Detta Lynn has one daughter, Michelle, and one granddaughter, Meridee Detta. Steve has three sons, Joe, Kyle and Dana.

Detta was a hard worker with a loving heart and a gentle nature. She worked tirelessly next to her husband in their many successful business ventures. She was also dedicated to the welfare of her children. Those who knew her described her as selfless and compassionate. She never had a bad thing to say about anyone. Nothing gave her more joy than taking care of those she loved. She leaves behind many that will miss her.

In her final days Detta enjoyed a warm Thanksgiving celebration surrounded by her family. She passed away as she lived, with a gentle smile on her face.