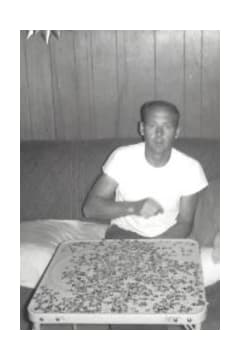 Bob Christensen or “Chris” as many people called him was born in Forestburg, South Dakota in 1928. He was the youngest of 11 Children. His Father and Mother and his 4 oldest siblings immigrated from Denmark in May of 1913.

He went to Mitchell High School in South Dakota and graduated in 1946. He played Basketball, Football and Baseball lettering in all sports. After finishing high school he enlisted in the Army. World War II had come to an end and he was sent to Sasebo, Japan as part of the Occupation Forces. He rose to the rank of Corporal and was in charge of 5 other men. The American troops formed a basketball league at bases all across the country. He was able to play on the team and travel all over Japan seeing the devastation caused by the war.

After two years he went home with an Honorable Discharge. He began a Bricklayer apprenticeship in Mitchell. He met Clare Allgaier on a blind date and they were married in 1951. In April of 1952 they had their first son, Stephen Kyle. He continued to work as a bricklayer building fireplaces and chimneys all over the State of South Dakota. In 1954 they moved to Garrison, North Dakota where he worked on the Garrison Dam. Their second son, Terry was born there in December of 1954. When they moved back to South Dakota their daughter Carol Marie was born in June of 1956. When work became scarce in South Dakota they moved to Seattle, Washington in the fall of 1958. Dad had two sisters who lived in Washington State. In May of 1959 Connie Lynn was born at Highline Hospital in Burien. In July of 1963 Dad and Mom bought a house in Des Moines, Washington where he lived for 13 years until they divorced in 1976. In September of 1976 their son, Terry was killed in a plane crash. After these two life changing events Dad lived in Federal Way, Enumclaw, back to Federal Way, Des Moines and finally he lived in Normandy Park where he passed away on March 22nd 2020 at the age of 91.

When the boys were growing up Dad coached Little League Baseball. He loved everything “sports”. After he retired from Construction at age 62 he spent time visiting his brothers and sisters in South Dakota. He enjoyed his grandchildren and was always present at birthdays and holidays! He lived and worked on a horse ranch with his girlfriend Sande in Enumclaw for over 10 years. The grandchildren enjoyed visiting their Grandpa Bob on the farm where there were horses, dogs, cats, a goat and a Shetland pony just for them to ride.

When Dad became ill with a rare blood disease in 2002 he moved in with his daughter Carol and her husband Murray in Federal Way. After 10 years he moved back to Des Moines where he lived with his daughter, Connie for 2 years. Dad had a major Stroke in 2015 forcing him to live in an Adult Family Home for the last 5 years of his life. He will be greatly missed by his three remaining children, four grandchildren and six great grandchildren.

We love you, Dad -May you Rest In Peace.