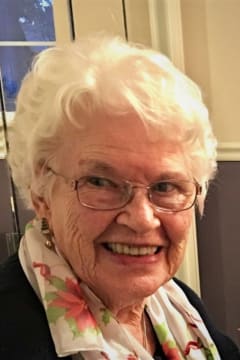 Sylvia was born on June 9, 1923, on a homestead in northeastern Montana, near Westby, a stone’s throw
from Canada and North Dakota. She was both the second and fourth youngest in a family of twelve (the
youngest being triplets).

Typical of that era, children seldom were schooled beyond the 8th grade, but Sylvia moved several miles
away and stayed with a family member while she completed high school. After graduation, she moved to
Spokane, Washington, where she attended secretarial school. While there, Sylvia met her future husband
at a boarding house that they shared.

December 7, 1941 changed many lives. Ron joined the Navy and became an instructor in Norman,
Oklahoma. Sylvia, along with her sister Martha, eventually road the train to Oklahoma where Sylvia and
Ron were married on November 27, 1943.

They eventually settled in a small home in Millwood, Washington, where her family grew to five little
Phillips’s. Ron stayed in the Navy and was eventually transferred to Norfolk, Virginia, then to San Diego
and Point Mugu, California. When the family settled in Oxnard, California, Sylvia went to work for the
Civil Service at Point Mugu and Port Hueneme and watched all her children go off to college, while Ron
built a boat, the “Ergo”.

For the next several years, Sylvia and Ron sailed the West Coast of North America from Port Hueneme to
Alaska on the “Ergo”. Sylvia learned to navigate in rough water and weather, and to fish. In fact, she
caught a record-breaking halibut. After living in Oak Harbor, Washington for a time, Sylvia and Ron
headed landward, travelling for several years in their RV throughout the United States and Mexico. Ron
and Sylvia spent their final years in Puyallup, WA and Merrill Gardens Senior Community in Renton.

Sylvia’s grandchildren adored her, playing endless games of “Crazy Eights” and “Scrabble”. Grandma
challenged them constantly until they mastered the games, this while Sylvia was mastering the art of
casinos, BINGO, shopping, traveling, sewing and crafting. Her major love was being with family at the
holidays and, in the kitchen, preparing rolls and gravy, baking Kringle and making fudge. And, of course,
Sylvia loved her food. And wine. And coffee. And her clothes and jewelry. And as she grew “older”,
she took extra effort with how she looked: she had her hair done every week, dressed up every day and
was never without both a necklace and earrings.
Sylvia was a member of several Lutheran churches throughout her life, attending church regularly and
participating in women’s groups and circles. Her daily devotions and prayers were a big part of her life.
She was a church secretary at Atonement Lutheran Church in San Diego and St John’s in Oxnard,
California.

When people reminisce about Sylvia, the terms “sweet”, “kind” and “lovely” are quite common. But
beyond that, Sylvia was “intrepid”:

Sylvia’s fearless and adventurous spirit led her to pack up and leave home at 18. Sylvia learned how to
drive (without help from Ron!) when she was 33. She led her five children through three major moves.
Sylvia learned how to swim when she was 55, even though she had a great fear of submerging her face in
water. Sylvia sailed the west coast of North America and travelled throughout the United States and
Mexico.

When the spirit moved her, Sylvia could harmonize with the best, yodel with the worst and
whisper to the hummingbirds. Sylvia Kristiana Phillips (Tommerup) was sweet, kind,
beautiful and intrepid to the end.

Thank you so much for the service today. I loved visiting with your mom every chance I got. She was my connection to my dad for so many years. The bonus to getting to know my aunt Sylvia and uncle Ron was also getting to know some of my cousins better! I have always been proud to be a tommerup 🙂 I am keeping you all in my prayers. I look forward to seeing you again. Love you all, Lila
- Lila Hunt
Aunt Sylvia and Uncle Ron visited our family in Wyoming several times as they traveled in their RV around the country. I always enjoyed the tales of their travels and hoped to one day do the same. They were an inspiration. My mom (Myrtle) and dad were lucky enough to ride the ocean waves in Uncle Ron's boat on a fishing trip off the coast of Washington. Great stories there! Wish I could remember one to share. Aunt Sylvia will be missed! Love you cousins! Marcia
- Marcia Fagnant