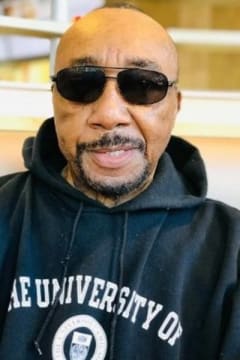 Roy Echols was born on February 17, 1941 to John Ella and Leroy Echols in Detroit, MI. Roy was the third of seven children; three of whom preceded him in death – Charles Echols, Johnny Echols and Barbara Ann Echols. Roy served five years in the navy on board the US Independence. A graduate of the Detroit Public School System, he continued his education after the navy, earning a bachelor degree from Lawrence Tech University and a masters from the University of Chicago. He pursued a career in accounting and business management in the automotive and health care industry.

Roy was the type of man that lived his life by his own terms. He let no one define what he would do or who he would be. He cared deeply for the people in his life, he tried to do what he could to help them. Not an affectionate man. And one of few words. He was a great provider and he always looked out for his family’s well being, even to his own detriment.

As my father he was a rock, reminding me to be true to myself in my pursuit of happiness. With over 30 years of sobriety, he served as a guiding compass in my life and many others. As a brother, when he was a child, he was always getting his sisters in trouble, but as an adult he was always giving good advice. He continued to share his wisdom with others and for that he was loved by many.

When he retired, he thought he wanted to be a chef. Always looking for an opportunity to try a new recipe from the cooking channels, he decided to perfect his cooking skills and enrolled in culinary school. After one year, 12 hour days spent slaving over a stove on a concrete floor was too much. He declared, “shit. I’m retired.” And quit. It wasn’t long after that that he started going to the Philippines, where he met Rosalyn, his second wife.

Roy’s memory will be carried on by his wife of three years, Rosalyn, his two daughters, Betina and Roychaela; two stepsons, John Leonard and Jarred; his four grandchildren, Brittany, Lakyah, Sirinity, Keandre and two great granddaughters, Ava and Eva. He is survived by his brother Slyvester (Slyvia), his two sisters Jean and Shirley, sister-in-law Judy Johnson; first wife of 15 years Gloria Jean and those he cared for as his children, Michael, Andrea,Trisha and Larry, who recently passed.

Service will be held on 8/8/2020 at 1pm at Cady Cremation Services.
Face masks will be required and social distancing should be observed.

I love the words that your daughter has left here. I guess it hits home for me because of the way you stood up for me, when no one else would. You gave me the opportunity to get back into the work force, to a "real job" 🙂 You knew I could do it and you fought alllllllll those powers that be to make it happen. In my saddest and darkest days, which honestly...to look back on now terrifies me how close I came to giving up...but you saw that. You saw me so sad and tried to cover for me, still believing in me. If not for you, my friend,,,,I would not be here to mourn YOUR loss. Thank you. Thank you for everything you did for me. Thank you for trying to reach out in your last days. I am so sorry that we didnt make that happen. Thank you to the beautiful Rosalyn for trying to reach me in time. She and I will sit and talk, later...when this has all ended. I am so sorry you had to go already. Seems like we have so much more to say. God bless you sweet man. I will thank Him every day for sending you to me when He did. Your friend forever, Karen Johnson
- Karen Johnson