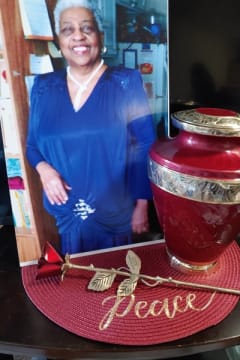 On January 1, 2021, Jessie Mae Gordon age 92, Spiritual Rising was at Valley Medical Hospital Intensive Care Unit at 3:10am due to many health complications.

Born on February 19, 1928 in Lake Arthur, La to Felton Cormier and Alvin Paul. She was the first of 7 daughters and 2 sons from Alvin Paul. In her earlier age she and her friends taught women to cook and sew. She taught and fed their kids and was a devote Missionary.

She later moved to Galveston, Tx where she met and married Leon Gordon. She worked as a housekeeper, nurses aide and a business owner. Jessie is survived by 4 daughters, Pamela Gordon, June Gordon, Diane Wilson and Sandra Gordon and 2 sons Kathib Abd Rahmaan and Kenneth Gordon.

Years later, she moved to Seattle, where she worked as a janitor and baby sat for her daughter's. She has a long list of grandchildren and great-grand children. Too numerous to list in full. She was a very devoted wife and mother. Nothing brought her more joy than teaching, sewing, cooking, baking, and sharing her thoughts. Anyone she could help she would. Her presence in our lives will be missed as she helped everyone that was in her presence, and put herself last. She was very sociable, friendly and giving to any and everyone that came into her presence. She never ran out of helping. She always reached out to see how family and friends were doing. Whenever you were around her you did not have to guess about what was on her mind, she would speak her mind at all times.

Jessie was cremated and at a later date will be brought back to Texas. Plans are currently being organized for a Zoom Memorial. This will be sent to family members and friends at a later date.