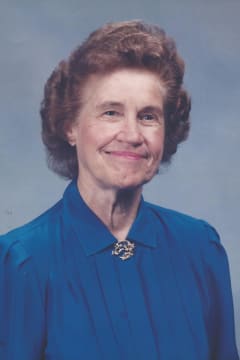 Georgia Ruth Staley went home to be with the Lord Sunday morning May 23rd, 2021 at the Issaquah Nursing Home in Issaquah, Washington. She was a devoted mother, grandmother, great-grand mother, sister and aunt. She was a long-time member of the Highlands Community Church in Renton, WA. She leaves behind a legacy of caring for others, strong friendships and a unique Christian journey.

She was born Georgia Ruth Ragle on December 19th, 1928 in Turlock, California. Close family and friends knew her as Ruth. Georgia was raised in Turlock and the family moved to Vallejo, California in 1941. She graduated from Vallejo High School in June of 1946. After high school she attended Biola University in La Mirada, CA in 1947.

Georgia loved music and it was a key part of her life. The first instrument she learned to play was the violin. She was also an avid piano/keyboard player and had a wonderful voice as well. Additionally, she loved to dance as a young adult and well into her retirement years.

She was preceded in death by her parents; George and Flossie Ragle; two husbands, Jack Stanberry and Richard Staley; and two sisters, Shirley Johnson and Doris Bickford. Family and Friends are invited to her memorial service on June 7th at 11:00 a.m. at Highlands Community Church 3031 NE 10th St. Renton, WA 98056. Please R.S.V.P. to Denee or Linda. A private graveside service will be on a later date.

Mom, I can not stop thinking about you. Your faith was amazing! Knowing in my heart that you are in a better place, is my main comfort. Love, Denee
- Denee Pettit